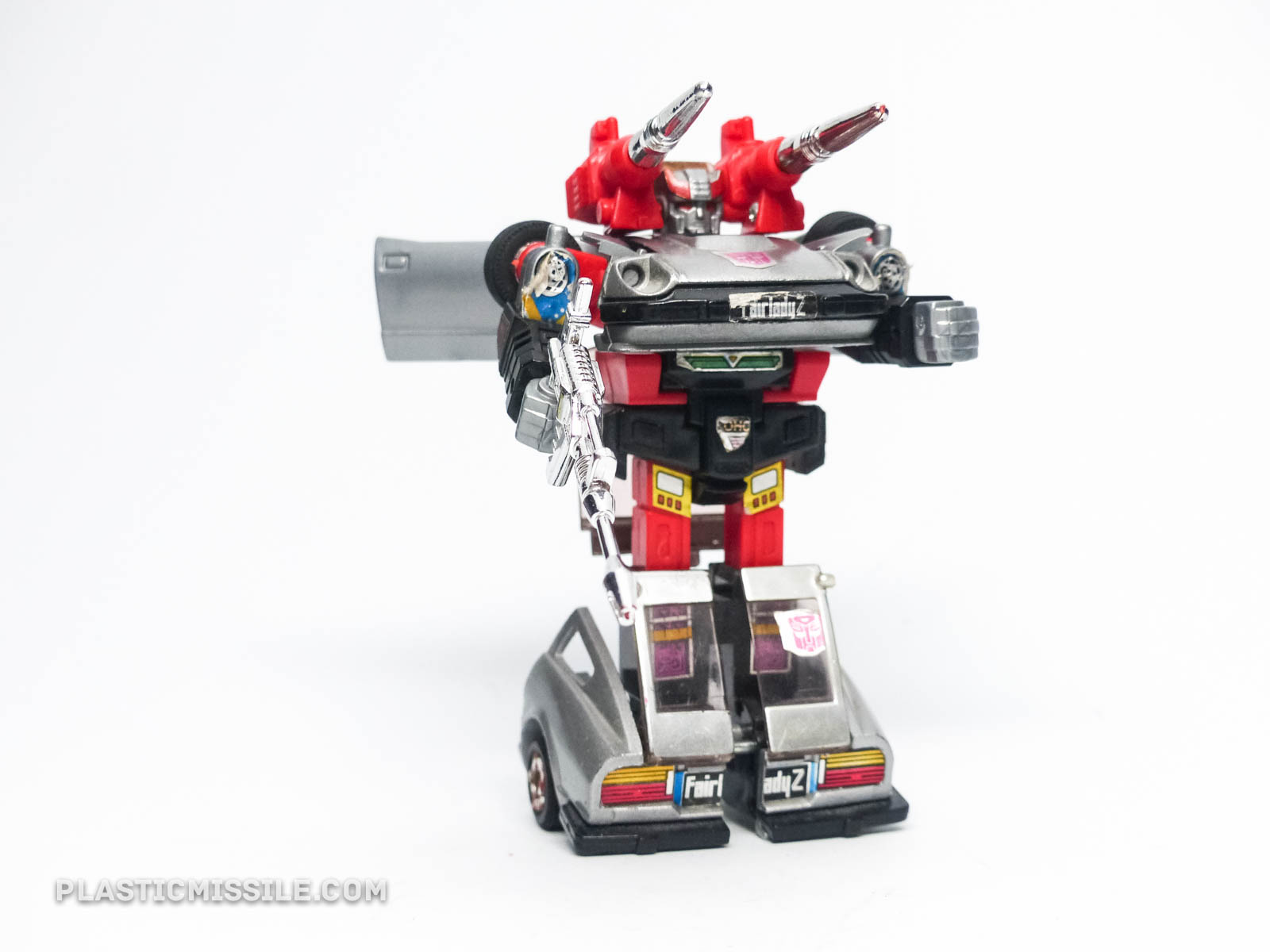 So this is my first Transformer. My actual first Transformer ever, that I got as a kid in 1984 and somehow managed not to mutilate or lose it during the past 30+ years. Probably because it’s my favorite TF – my Precioussssss. And also because I left it in my parents’ care at their home and didn’t bring it along with me during all of my 10+ housing moves. Lucky Blue.

Condition-wise, I’m pretty amazed that the roof and rear windows are still intact, although there’s a hairline fracture on the windshield. Of course, his arms are floppy to all hell, and the only way to pose him is to rest his arms on a slight edge of his car hood / chest. That’s fine and dandy. Better than broken or missing. As with any vintage item, I’m sure G1’s in any condition will become harder to find as time goes on, so I think that collecting and preserving these artifacts for future generations to enjoy and marvel at. The quality of the materials in the newer reissues don’t compare by far, as the G1’s made in Japan (and most stuff from the 80’s made in Japan for that matter) are vastly superior, and it really shows through in the lack of detail in the head sculpts and the lustre of the finish.

I always took good care of my favorites throughout my childhood, although I trashed lots of other TFs – especially the chunky full-plastic bots after the movie came out, like the Headmasters. Even back then I was super biased towards figures with die-cast metal. Because die-cast is life. But really I think it was to do with the way I was introduced to toys, like for many boys. I started with Tonka trucks and cars, Legos and other building sets, and then came the robots. Many of the figures that came from Diaclone and Microchange were die-cast replicas of real cars, planes, and trucks in various scales that were just a bit smaller than was common for die-cast vehicles (mostly 1:18 or 1:24 for cars), which made them more playable and collectible. They looked virtually identical to die-cast replicas on the outside, but they transformed into robots. Mind. Blown.

Bluestreak is the quintessential Autobot character and toy. As one of the original pre-TF figures from Diaclone and a super dope looking sportscar at that – a Nissan Fairlady Z no less, it’s no wonder why Marvel picked him to be included as part of the core cast of the cartoon. He’s so quintessential that the Autobot symbol has to be derived from his face. The horns, the helmet, the eyes with cheek lines, Bluestreak is the Autobot symbol. I feel that the Takara design and marketing team must have gotten inspiration from Greek and Egyptian gods for the original Diaclone and Microchange lines. There are a lot of references to mythology in a lot of Japanese robot designs from the late 70’s and 80’s and the designs evoke retro-futuristic robotic Centurions.

To think that over 40 years have passed since the original designs were created for these toys astounds me. They’re an engineering and design feat with top of the line manufacturing methods and materials, for boys’ toys. No wonder so many fans of these things went on to become great designers and engineers themselves. Transformers are inspirational and of cultural value.

In short, if I were stranded on a deserted island with only one toy, I’d be more than happy for it to be Blue. You’re my boy, Blue!