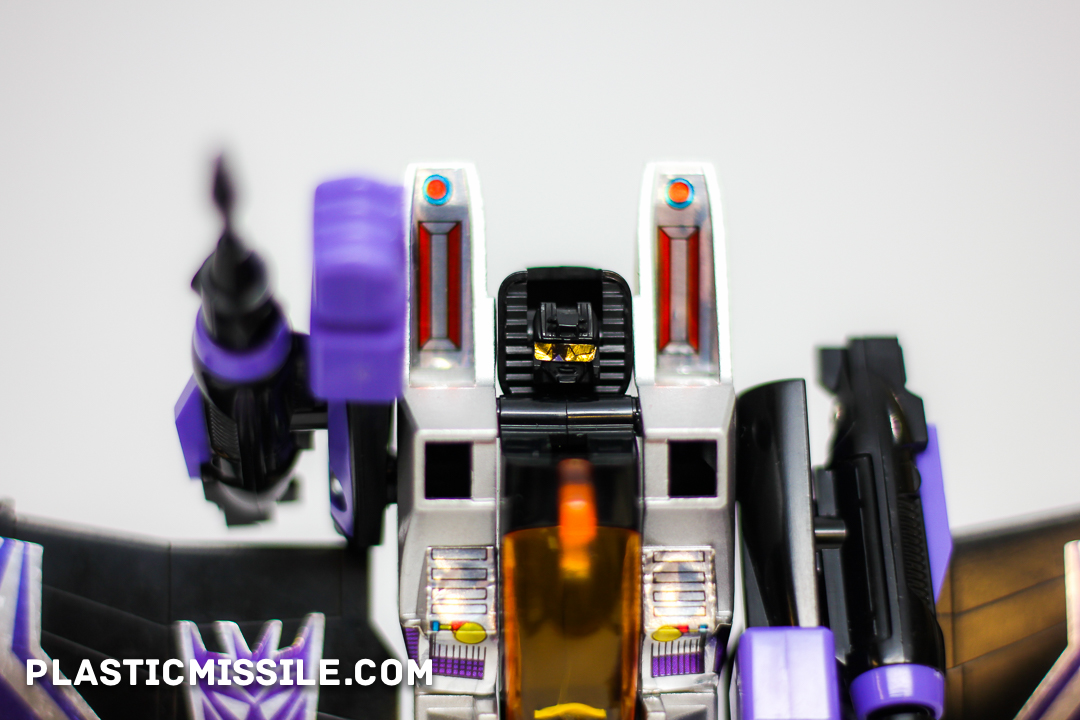 Skywarp has always had a pretty weak role as a TF character on the show and otherwise.  His ability to teleport could have given him a much more pivotal role, but instead he mostly just used the power for lame pranks, like pushing comrades down stairs. And then he got killed off during the 1986 movie where he was most likely recycled into one of Cyclonus’ minions. He could have been oh so much more, with his flashy color palette that is the epitome of Decepticon flair. But why? Maybe it’s a case of “last one in, first one out.”

The first Hasbro seeker? Skywarp’s mold was a direct Diaclone port-over, but his colorway never made the cut for the Jet Robo lineup, unlike Starscream and Thundercracker. That sort of makes him the first original Transformer redeco, doesn’t it? But from “historical” archives we can see that seeker jets went through many different iterations and experiments before the final configurations were locked down. Case in point…

Who’s DIRGEWARP?! The inimitable (All the Best) Maz has graciously documented the prototype history of the G1 seekers here, with gratuitous seeker pics, like this early prototype of “Dirge”. Instead of getting Skywarp with the first batch of jets in 1984, followed by Blue-bodied Dirge in 1985, we could have received this fashionably faux-pas mishmash of colors here as the final Dirge release, with Skywarp left in the dust! Countless thanks to whoever axed that idea.

But that orange, oh that orange… I’m not sure if there were any other Takara designs that used translucent orange for a cockpit color, but this for me is just the cat’s meeeeeoowwwza. We’ve seen a lot of Decepticon paint schemes with purple and green (Devastator, Scorponok, G2 Megatron, to name a few), but purple with orange here is just a new concept altogether, and it works so well on Skywarp. We wouldn’t really see that purple & orange combo again until the 1986 movie, with Unicron, Galvatron, and even Cyclonus getting in on the 80’s color fad. What bold fashion times we lived in during the 80’s. Of course, everything repeats itself. Hey, isn’t it the Lakers’ color scheme too? 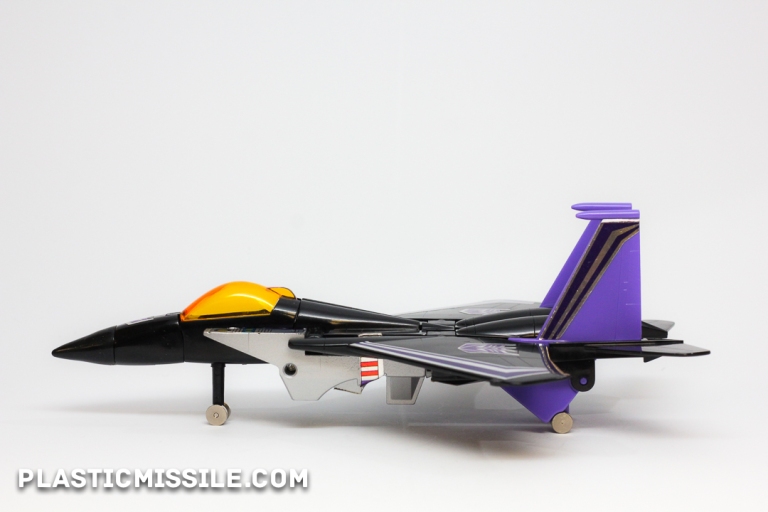 Presenting His Royal Purple Majesty! The late, great (artist formerly known as) Prince himself would have approved. What other color combination in the history of Transformers could be more Decepticon-esque than black and purple? From every sticker to all the ABS plastic detailing, Skywarp is dripping with Decepticon swag. 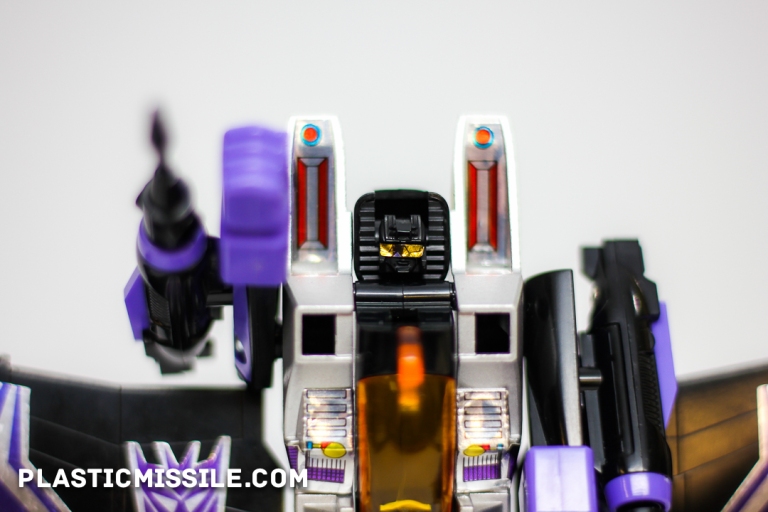 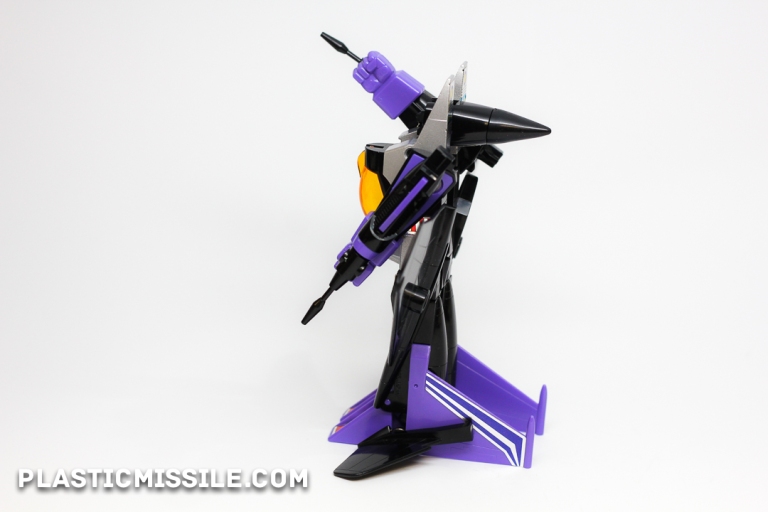 Though Skywarp may not be considered a very rare figure by any means, I think it may be one of the best figures to come out of the first collaborations between Hasbro and Takara. I strongly feel that every Transformers collector should all have this exceptional figure in their G1 collection. With his striking jet black base and vivid purple accents for contrast, no wonder he’s become such a popular figure. Even though he didn’t really have anything but a supporting role in the show and comics, he has definitely secured a permanent place in the hearts of TF fans based on appearance alone, for good reason. I highly urge anyone interested in G1 figures to snag this stunning seeker, especially if it is the made in Japan release. While the other G1 seeker jets may tout their Diaclone lineage, Skywarp has stood the test of time as a standout Hasbro release for many generations to cherish. 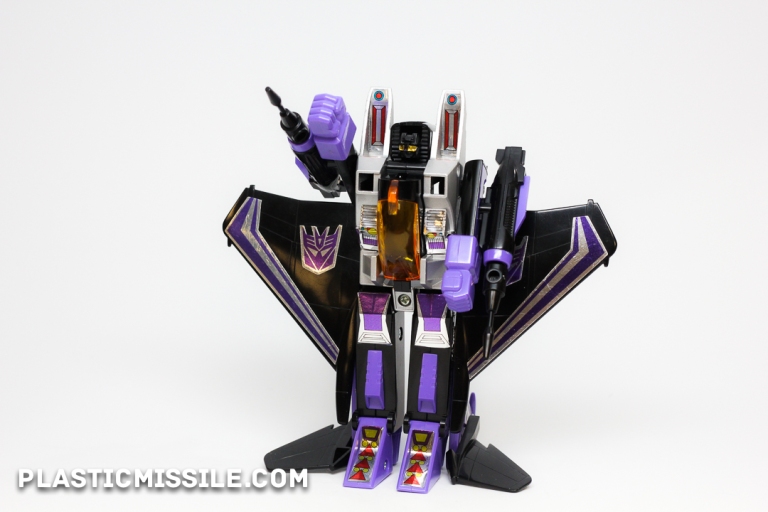