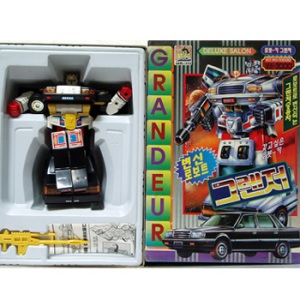 Another figure in the Atom G1 KO line, without the extra goodies. Like the Sonata bot, this is another alt mode featuring a Korean Hyundai car, the Grandeur. Probably the 2nd gen Grandeur which was popular in Korea between 92 and 98. This figure’s head isn’t a Transformer ripoff, but instead looks like something by Bandai or a Gundam, contrary to the box art. Cool looking head.